History of Thurstan Base Ball 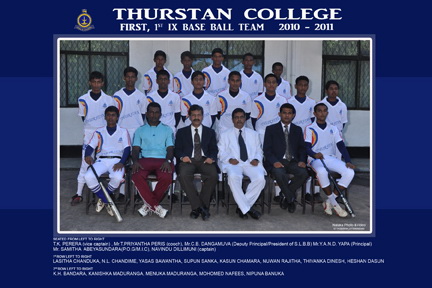 In the sports history of Thurstan has got a new dimension with the introduction of Base Ball in year 2007. Under the guidance a leadership from the acting principal Mr.Janaka Kumara and the deputy principal Mr.C.B Dangamuwa the Base Ball game started and carried out at a full fledge.
The three teams of U-13,U-15 and U-17 were formed and trained by master in charge Mr.C Rohan and the coach Mr.T Priyantha Peris.
Ashen Nettikumara,Yasas Bawantha and Navindu Dillimuni lead the U-13,U15 and U-17 teams respectively.
Under the leadership of Ashen Nettikumara U-13 team took part in the all island tournament in year 2008 and 2009. The U-13 team again took part in the all island tournament and went up to quarter final. U-15 team under the leadership of yasas Bawantha took part in all island tournament in year 2009 and 2010. U-17 team lead by Tilan Perera took part in all island tournament in year 2010 and2011.
Under the leadership of Kanishka Maduranga the U-15 team took part in the triangular base ball tournament,organized by St.Anthony s’ college wattala. St.Anthony s’ college,Thurstan college,St. Sylvester college Kandy were the participants. The great victory of 18-08 was got by Thurstan in the first round with St.Sylvester college. In the final round Thurstan was the runner-up with St.Anthony s’ college with score of 04-06. It was the first trophy in the base Ball history of the Thurstaknights. Dineth Dilhara was chosen as the best batter in this tournament.
Under the guidance and counseling of the principal Mr.Y.A.N.D Yapa,the deputy principal com the president of Sri Lanka schools’ Base ball Association Mr.C.B Dangamuwa,master in charge Mr.Samitha Abeysundara and the coach Mr.T Priyantha Peris the first,1st IX Base Ball team bloomed.
Navindu Dillimuni was the first Base Ball captain of Thurstan college and Tilan Perera was the wice captain. The first all island tournament of the first U-19 team was in Gall Richmondcollege was lead by the first captain Navindu Dillimuni and Thurstan went up to quarter final.
U-15 Base Ball team lead by Kanishka Maduranga brought the rank to five in 2011,at Anuradhapura.
Spread the love